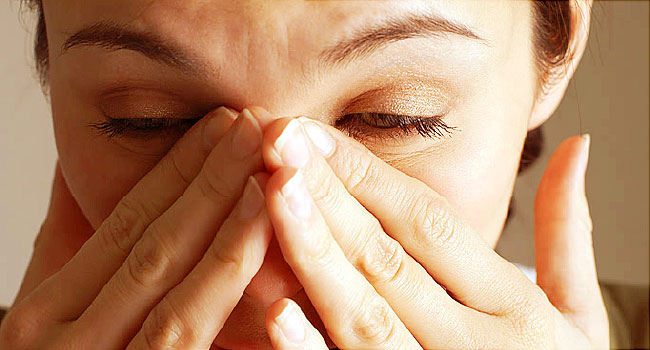 While spring is regarded as the season flare-ups of the sinuses, a number of people suffer from that bothersome and sometimes painful infection of the sinuses known as sinusitis when the climate in South Florida gets cooler.

A sinus is a hollow, air-filled cavity, or the hollow cavities in the skull connected to the nasal airway by a narrow hole in the bone (ostium). Humans have four pairs of these cavities. These are the:

The cells of the inner lining of each sinus are mucus-secreting cells, epithelial cells and cells that are part of the immune system.

Functions of the sinuses include humidifying and warming inspired air, insulation of surrounding structures (eyes, nerves), increasing voice resonance, and as buffers against facial trauma, and decreases the weight of the skull

What is a sinus infection?

A sinus infection occurs when a virus, bacterium, or a fungus grows within a sinus and causes intermittent blockage of the sinus ostium. Drainage of mucus often occurs when the blockage is relieved. The drainage usually goes from the nasal passages to the throat or out the nostrils. Such infections also cause inflammation of one or more sinuses. This adds to blocking the openings of the sinuses and causes discomfort.

Sinusitis is the Inflammation of the air cavities within the passages of the nose. This can be caused by infection or an allergy and irritation of the sinuses.

Sinusitis commonly occurs when environmental pollens (from plants) irritate the nasal passages. It can also result from irritants, like chemicals or the use and/or abuse of over-the-counter nasal sprays, and illegal substances snorted through the nose. About 30 million adults have “sinusitis.”

The drainage of mucous from the sinuses can also be impaired by thickening of the mucous secretions, by a decrease in water content of the mucous brought on by disease, drying medications (antihistamines), and lack of sufficient humidity in the air. The epithelial cells have small hairlike fibers, called cilia, which move back and forth to help the mucus move out of the sinuses. These small cells may be damaged by many irritants, especially smoke and prevent them from helping the mucus to drain from the sinuses.

Stagnated mucus provides an environment for bacteria, viruses and in some circumstances fungus to grow within the sinus cavities. In addition, the microbes can initiate and exacerbate sinus blockage.

Symptoms of a sinus infection?

Sinusitis caused by virus infection can be treated by pain and fever medications,  decongestants and mucolytics. A common treatment is to inhale the steam of water vaporized with ingredients like Vicks vapor rub, Tiger-Balm, and eucalyptus. The various treatments help to drain the sinuses and offer relief.