Some of the world’s leading companies – Google, Facebook, Uber and Airbnb –  are planning a major upgrade for Haiti to position the country as a hub for information and technology.

Dubai-based Haitian-American entrepreneur Christine Souffrant Ntim, the founding host of the Haiti Tech Summit, told the 450-plus participants at the two days of talk which ended Wednesday, that she wants to “catapult Haiti forward through innovation, tech and entrepreneurship.”

“We know Haiti can actually transform itself, be a new global case study for what happens when you actually get the right influences in the room to transform a nation,” she said.

She underscored that the aim of the meeting was to “transform the narrative around Haiti’s brand as a nation.”

Unlike its Caribbean neighbours, Haiti, which was devastated by the January 2010 earthquake and a series of storms and hurricanes, has not been able to keep pace with ever changing technology.

Communication director for the summit, Mildred Louis, a technology consultant who formerly worked for telecom giant Digicel in Haiti, told the officials that Haiti is ripe with opportunities and action was needed to create much needed change.

“In a market like Haiti, we need to force a movement. A lot of people didn’t think this summit was real, and today we have business leaders, members of the wealthy families asking, ‘how can we be involved?’”

“There is a pool of potential here to build an incubation system, alliances, foster coding and a tech industry,” she said 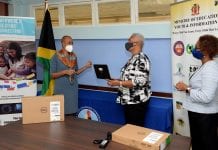