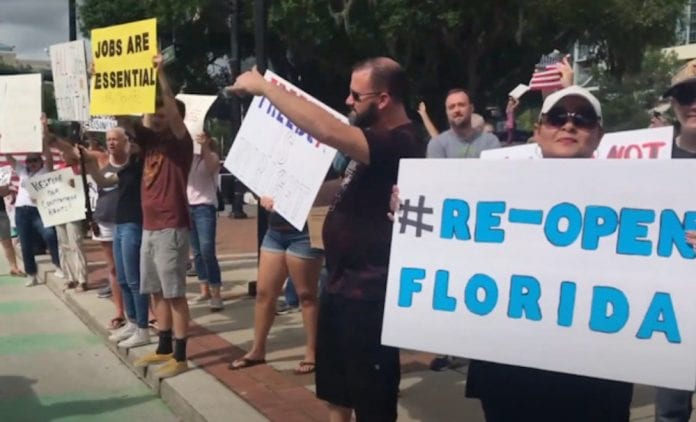 When states around the country began issuing stay-at-home orders to stem the spread of the coronavirus (COVID-19) in mid-March a South Florida psychiatrist told this newspaper if these orders exceeded one month there would be a “great risk of social disorder.”

The psychiatrist argued that forcing people to be locked in their homes, away from normal ways of life including, work, school, recreation, and the church is “against modern social norms.” For most people home is a place of refuge and rest, the place to recharge one’s energy after outdoor activities, not to be locked in for weeks.

Now, less than six weeks after most US states have locked down all but essential businesses and ordered residents to stay-at-home, increasingly residents are protesting the measures.

Protestors, some obviously politically mobilized, are taking to the streets demanding their rights to go about their regular routine, notwithstanding the fact that the US has approximately 800,000 cased of COVID-19, and over 41,000 deaths, and rising.

In Florida, where cases of COVID-19 contamination and related deaths have been increasing exponentially daily, the South Florida Tri-County Car Caravan have been publicly protesting, calling for the lifting of restrictions on businesses and the reopening public spaces.

Although it’s obvious some of the protests have a political bias, encouraged by political leaders, some of whom called for states like Michigan, Minnesota and Virginia with strict stay-at-home measures to be “liberated.” It’s also obvious economic challenges are fostering the growing protests.
Conservatively, it’s estimated some 22-million Americans are currently unemployed because hundreds of businesses are closed. In most communities, people are growing desperate for money to buy food. Despite the federal government’s initiative in helping residents and businesses with financial relief, it is yet to reach many of those it’s supposed to help. The adage “a hungry man, is an angry man” is proving incredibly true as hungry Americans continue to stay-at-home.

But, the COVID-19 pandemic is far from over, and while protests also take place in other countries, there have been several instances, for example in Singapore, where attempts to lift stay-at-home measures have been followed by a resurgence of spikes in the virus.

America, like the rest of the world, is faced with a very elusive new virus, the treatment and cure of which is baffling the most learned scientists. One thing, most of these scientists agree on, and proving effective is that social distancing, including stay-at-home and business closure orders, are effective in controlling the viral spread.

While this works, it’s simply not normal to expect people, especially young, energetic and passionate people, to be deprived of socially acceptable norms indefinitely. People are going to continue to protest at an increasing rate, and social upheaval become a real risk, the longer they are mandated to stay-at-home.

It is now incumbent on elected officials from the American President down to city mayors to adapt a unified approach to see how, and if, some businesses and public places can be opened, and residents eased out of their homes.

There are plenty of recommendations of what can be done to protect residents if they are to return to normalcy. These include people spacing at the workplace, making wearing masks and gloves mandatory in public and at work; increasing personal, equipment, furnishing, transportation and building sanitization, etc. But there is no guarantee these measures will prevent contamination when the general public leave their homes.

The main problem is, according to the scientists, there are many people who have contracted COVID-19 are walking around asymptomatic, not showing symptoms of the virus. As a result, the scientists have been saying, but in America, few seem to be listening, that the safest way to reopen businesses and relinquish stay-at-home orders is to significantly test people for the virus. These tests will separate the infected from the uninfected and offer some guidance of who can return to normal activities.

Here in America, only 4 million people, less than 2 percent of the population, have been tested for COVID-19, despite boasts of America having conducted more tests than any other country.

Every day governors and mayors across America have been appealing to the federal government to assist with more testing, but there’s no real federal plan to increase testing.

In a startling Harvard University report titled, “Roadmap to Pandemic Resilience” released on Monday, a group of scientists, social scientist, economists and others concluded for the country to safely open and be fully economically mobilized by late July, “Test producers will need to deliver at least 5 million tests daily by early June.”

Herein lies the core of the conundrum. Unless there’s a profound national plan to test Americans, significantly increasing testing is unlikely. The less people tested, the greater will be the risk of the resurgence of COVID-19 contamination nationally should stay-at-home orders are lifted,

The solution is obvious. If the nation’s leaders want to open the nation, prevent further spread of COVID-19 and significant social upheaval they must step up testing for the virus immediately!