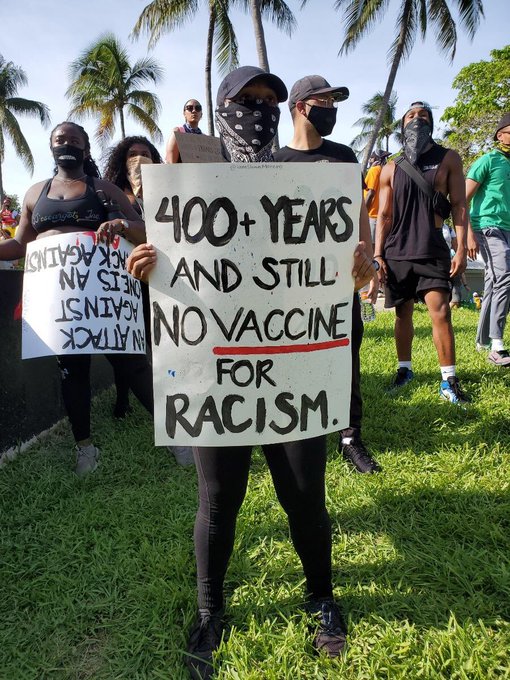 That some people are more outraged by the sporadic rioting and looting than the systematic killing of unarmed Black men and women across the nation is telling. Remember former NFL quarterback Colin Kaepernick was aggressively condemned for peacefully kneeling during the National anthem at NFL games, in protest against police brutality. It’s ironic that the now-infamous image associated with George Floyd’s death is a cop kneeling on his neck.

So yes, it is not unexpected that resentment to this continuous humiliation is boiling over. What we see happening on the streets, though ignited by the murder of Floyd, is a fire burning from 400 years of oppression—overt and subtle, systemic and systematic, personal and collective.

It’s unfortunate that Black people, on whose backs this country was built, have continued to suffer persistent injustices since landing in America in the 17th century.

History shows that Black people are largely responsible for building American enterprise—as enslaved Africans, they picked cotton, built railroads, historic universities, and even the White House. As free Blacks, their cheap and at times unpaid labor (from prisons) continued to weave the fabric of the American economy and building wealth for the ruling class—all while not being allowed to directly benefit from that wealth.

The raging protests we see nationally and around the globe, show that people are simply fed up with police brutality and injustices from a system that allows it to thrive unchecked.

Millions of Black people are walking around with pent up anger from their personal experiences with racism—whether this manifests itself in the brutal murder of Floyd by four Minneapolis cops and the over-policing of Black communities, or systemic inequities within government and social entities. They have been refused access to rent or buy homes in certain neighborhoods, rejected for jobs for which they are suitably qualified, and refused service in some establishments—in 2020—for no other reason than the color of their skin.

It’s, however, encouraging to note that the protesters who have taken to the streets comprise various races and ethnicities—obviously Americans who have grown tired of inequities and are standing in solidarity. This might be the moment for change.

The question going forward is, how do we effect sweeping, systemic change? One school of thought is that the Black community should step up voter registration and mobilize for a massive voter turnout in the upcoming elections, with a laser focus on local elections. Law enforcement policies come from local governments including mayors, city commissioners, city councilors, and other leaders. These are the officials who negotiate police contracts, who determine what the policies are and provide the guard rails.

For example, Minneapolis police are sitting pretty with a $193 million budget for 2020—bumped up by $10 million to fund an extra class of recruits. Sadly, there is little evidence that more police and more policing actually stem crime. This, while social programs and agencies that help in crime prevention are severely underfunded. In Minneapolis, affordable housing gets just $31 million and community organizations that work with at-risk youths, a mere $250,000. How about voters petitioning the government to divert some of the money spent militarizing police forces across the nation to social and educational programs that will uplift oppressed and disenfranchised people?

It’s important that people not only turn out to vote in record numbers but use those votes wisely. It is going to be imperative that the Black community, and supportive communities, apply constant pressure on every elected official—from those in local office to those in the White House—to make the changes that will once and for all end police brutality, reform the justice system, and enforce equality in employment, education and job opportunity. Essentially, the community has to demand an end to systemic racism. It is simply not enough for mayors, commissioners, city councilors and others to utter all the right words at this moment. They have to stop perpetuating policies that protect the status quo and opposing policies that offer change.

It is incumbent on us as Americans to remain relentless in activism and use this momentum to push for meaningful change—beyond this moment.