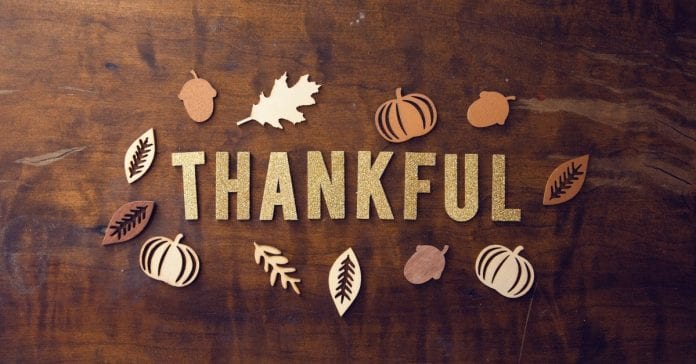 Saying this year 2020 is unusually trying and challenging is a profound understatement. Those alive, in good health, have food on their tables, and roofs over their heads should be happy to shout “thanks” loud and clear as they celebrate this Thanksgiving holiday.

No one in America imagined when hope and aspiration flared on January 1, 2020, that on Thanksgiving Day there would be news that some 260,000 of their compatriots including family members, friends, co-workers, and neighbors would have lost their lives to a dreadful virus—COVID-19. No one foresaw that over 12 million people would have been infected.

In several ways, this virus, this pandemic, now endemic in  America, has prevailed to change the lives of almost every American.

COVID-19 has taken away what people grew accustomed to and took for granted as normal social lives. No longer can people gather as they were accustomed to. Family members and friends visit each other at risk of contracting this virus. This Thanksgiving the traditional family feast, with a table surrounded by immediate and extended family members and friends will likely not take place, because of the risk of contamination.

Although it’s natural if some are depressed and unhappy at the separations and the abnormal mask-wearing COVID-19 has created, if this Thanksgiving Day they have never contracted the virus and are healthy, there’s much to be thankful for.

COVID-19 has also robbed many Americans of their financial foundation. Millions have either lost jobs, had their incomes significantly reduced, have been forced to close their small businesses, and are in a financial quandary. Many have been forced to stretch their dollars and depend on help from the community. The situation is far from ideal, but hard as it is, there’s still reason to be thankful. There’s still hope that relief is on the way.

We should also be thankful that, even as we tolerate an unusual Thanksgiving Day, there’s news of pending vaccines.

Apart from the deadly virus that has displaced the normality of American life,  2020 has been a very challenging and contentious year politically as the nation tolerated a contentious presidential campaign.

Despite the challenges of COVID-19, thankfully, a record number of over 150 million Americans found it possible to vote legally and elect a new president. The upheaval and chaos some predicted would have taken place on Election Day, thankfully, didn’t materialize—a testament to the maturity of American voters and those who planned the elections.

But, although the elections are over, and from all indications, conducted without evidence of fraud, the loser of the presidential election, now 23 days later, has refused to concede defeat, and persist in insisting fraud was committed without any credible evidence.

It has been difficult for most people, including those coming from the Caribbean where election results are usually accepted without discord, to believe the situation prevailing in America. A situation in which preliminary counting and recounting of the presidential election results verify that one candidate clearly won with the electoral college and popular votes, but in which the losing candidate continues to resist his defeat.

But, thankfully, most of the country, even those on opposite sides of the political fence are determined that the constitutional provisions established by the founders of this nation must prevail, and the election results will be implemented according to the decisions of the majority of voters.

Undoubtedly, this has been a very challenging year for many. But behind the often very dark clouds,  there are silver linings.

The restrictions created by COVID-19 have forced families to live closer to each other and, in some cases, restored passions some thought were lost. The virus has shown the fickleness of believing in riches or material gain, as it proves people can survive even with very little. The challenges have proven to many Americans the strength and quest for survival few knew they had within them. It has revealed although racism here is a real and present danger, people of all races are no longer willing to accept the atrocities this social scourge brings. And, 2020 revealed people will not be reluctant to resist barriers placed before them when they need to change those who lead them without care for their welfare.

Yes, life may not be the normal most people have come to know in past years, but for coping with the challenges brought in the past 10 months and 25 days, Americans should be giving thanks loud and clear this Thanksgiving Day.