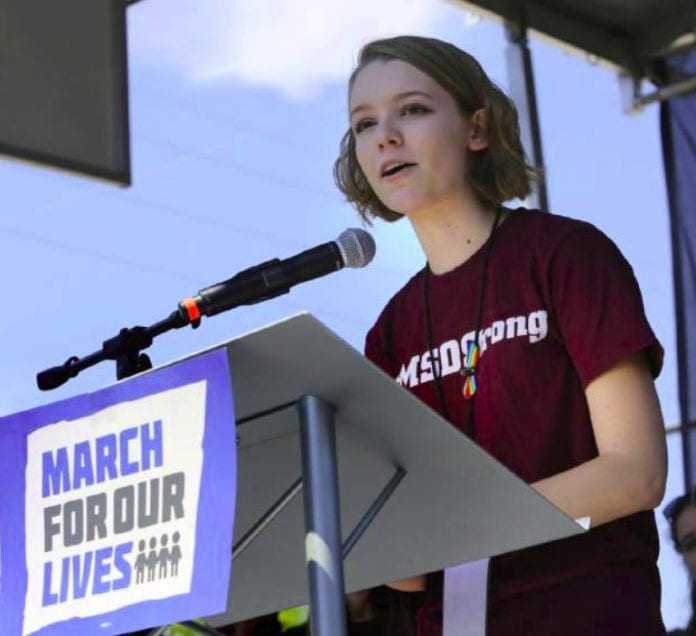 Caribbean-American students at the Marjory Stoneman Douglas High School and across Broward County hope voting in this November’s mid-term elections will help stem the rising tide of hate being leveraged against the school’s emerging activists and the Never Again Movement.

Three students, all female and all almost 18, told CNW they will be eligible to register to vote this Fall and hope exercising their democratic right, will make a difference.

“We will definitely be voting for change in November. This is where the Never Again Movement will really make a difference,”

the three, who declined to have their real names used for this article because of fear of reprisals like the ones being hurled at Emma Gonzalez and David Hogg, said Jill, not her real name, who attends MSD High in Parkland, said that she and her colleagues are extremely concerned about what they refer to as“insane political pu sh back.”

“There’s a lot of hate especially for Marjorie Stoneman Douglas students,” she said. “This is unbelievable. People are expressing hate for us after a gunman killed 14 of my fellow students, and three staffers. Can we be blamed for wanting to reform gun control after this tragedy?”

A Miami Herald report recently indicated that a memorial set up for MSD student victim, Alaina Joann Petty, had been “politicized by marchers, who planted political posters around flowers.”

“To show how hateful people opposed to the movement are, can you imagine people have vandalized the memorials that was set

up for some of those who were killed on Valentine’s Day?” Jill shared.

However, none of the three students have plans to pull out of the movement but are refraining from having their names used or their pictures taken because of concern from their parents.

Getting out the youth vote

“We will still be very engaged in getting young people to register to vote in next November’s mid-term elections,” Jane, another student who spoke to CNW only on condition that her real name not be used, said. “It’s only that we, personally, would prefer less visibility.”

Not a political movement

“This isn’t political,” Jill reiterated. “What the movement is seeking is for elected politicians to vote for laws that will, for example, create intense background checks to buy guns and ban or make it harder to buy assault rifles. It was an AR-15 that killed 17 people at my school.

“Because we want to vote out politicians who do not want to change existing gun laws, we are being branded as a political movement. Gun violence is an American problem that affects people regardless of political party,” she added.

The Caribbean roots student also referred to the hate being thrown primarily at two of the movement’s founders and leaders, Cuban roots Gonzalez, and journalism student Hogg, both survivors of the Feb.14th Parkland school massacre. “Look what they did to Emma over the weekend. Someone photoshopped her image to make her falsely appear to be destroying a copy of the American constitution!”  Jill exclaimed. “This caused so much hateful reaction to her. It’s so wrong to do something like that!”

Meanwhile, even though the three expressed satisfaction with the march in Washington on Saturday, March 24th, Jean revealed that there was even some level of hate there and not “everyone in that crown was supportive of the movement.”

“I heard people in the crowd, mainly adults, who were critical of the speakers, saying they were coached by politicians opposed to the government,” she said. “Why can’t people believe this movement is born from our guts and our hearts? Young people are sick and tired of so many dying from gun violence.”

For now, the three hope their votes, and the votes of their colleagues this Fall, will be the answer to the hate that continues to rise up against MSD and the Never Again Movement.