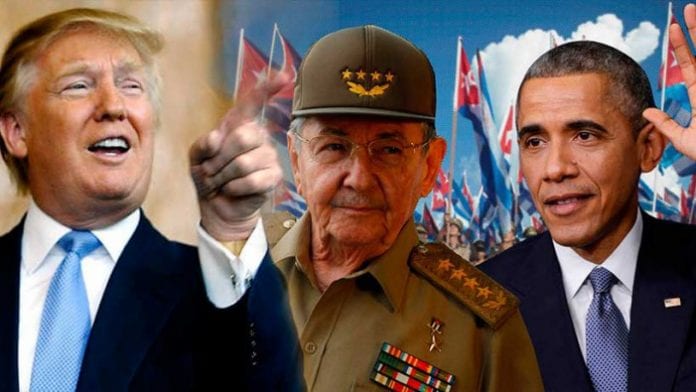 President Trump announced a new policy toward Cuba Friday that cut tourist travel and seeks to halt commercial dealings that benefit the Castro regime. His measures however left in place many changes implemented by his predecessor, Barack Obama.

In a speech delivered in Miami’s Little Havana, where an older generation of Cuban Americans has long objected to normalization of relations with the communist government of President Raúl Castro, Trump ticked off a litany of examples, past and present, of the regimes’ repression of its citizen.

“With God’s help a free Cuba is what we will soon achieve,” Trump said at the Manuel Artime Theater, a highly symbolic venue named after a leader of the Bay of Pigs exile invasion of Cuba in 1961, a failed U.S.-backed attempt to overthrow the revolutionary government of Fidel Castro.

Trump’s change in policy prohibits any commercial dealings with Cuba’s economically powerful military and, according to White House aides, was driven by the president’s concerns that the previous policy was enriching the Cuban military and intelligence services that contribute to repression on the island.

Through civilian-run holding companies, the Cuban military owns or controls much of the economy, particularly the tourism sector. Former president Barack Obama had allowed some transactions with the security services on grounds that money would trickle down to individual Cubans who gained employment and more contact with the outside world.

“We now hold the cards. The previous administration’s easing of restrictions on travel and trade do not help the Cuban people,” Trump said. “They only enrich the Cuban regime.”

City of Miramar Issues Order For All Residents to Wear Face...