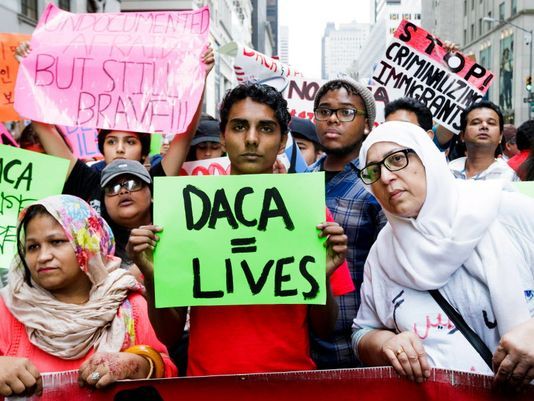 US President Donald Trump is expected to the end the popular Deferred Action for Childhood Arrivals (DACA) immigration program, introduced by former President Barack Obama. The program has shielded hundreds of thousands of young undocumented immigrants, called DRREAMERS, from deportation.

Today, Trump plans to announce his administration will be terminating the program, despite giving assurance shortly after his election last November he would preserve the program. He is, however, also expected to defer enforcement of the termination for another six months.

Trump’s plan would give Congress, where many in his own party support DACA, time to come up with an alternate immigration plan before the end of the six-month grace period.

Trump was strongly considering ending the program after a six-month delay but said officials cautioned that he could still change his mind.

Implemented by a President Obama executive order in 2012, DAC has allowed an estimated 800,000 undocumented immigrants to stay in the US for renewable two-year periods to study or work if they had come to the United States before age 16.

Trump, whose anti-immigrant rhetoric helped propel him to the White House, made ending the program a top campaign promise, although after he was elected he appeared to soften his stance saying he “cared” for the young men and women affected.

It’s alleged that Attorney General Jeff Sessions persuaded Trump to advance the program to Congress, arguing that the Legislature — not the Executive — was responsible for writing immigration laws.

“These are kids who know no other country. They were brought here by their parents and don’t know another home,” Ryan said in a radio interview on Friday. “And so, I really do believe there needs to be a legislative solution.”

Florida Gov. Rick Scott, traditionally a strong supporter of Trump has come out in defense of DACA. Over the past weekend Scott issued a statement urging the president not to terminate the program. Scott said, “I do not favor punishing children for the actions of their parents. These kids must be allowed to pursue the American Dream, and Congress must act on this immediately.”

In a letter to the White House, top Republicans and Democrats in Congress, business leaders — including executives at Cisco, eBay, Facebook, Marriott and Microsoft — warned of the moral and economic impact of dismantling the program.