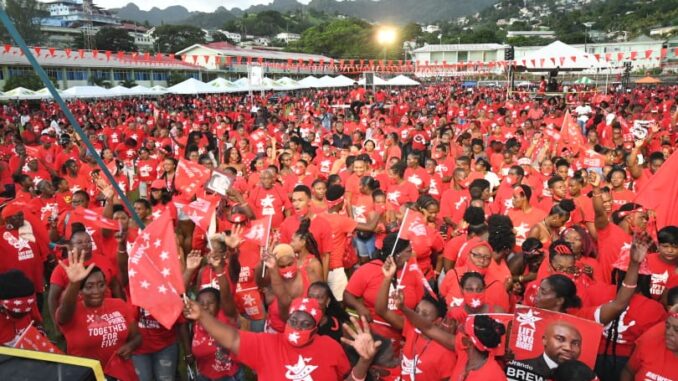 The ruling Unity Labour Party (ULP) has launched its manifesto for the November 5 general elections with Prime Minister Dr. Ralph Gonsalves saying it provides an option for voters deciding on the future socio-economic development of the island.

“The manifesto is 100 pages long, longest, thickest in terms of its size. It is full of ideas and policies and programmes for the sustainable development of St. Vincent and the Grenadines,” Gonsalves told a public meeting of his ULP party on Sunday night.

Gonsalves, who is seeking an unprecedented five consecutive term in office, defended the release of “a big manifesto” saying “we value the intelligence of our people.

“It has been horned by the education revolution,” Gonsalves said, urging supporters to ensure they receive a copy either in hard copy or online because ‘we want you to study it very carefully over the next 10 days and you will see that this is a manifesto which has come from the bowels of the people of this country, from our experiences and from our own creative minds and written by our own hands.

“It is a guide…which will continue the transformation in social and economic terms, to build further on the amazing sound foundation that we have laid since 2001,” adding that “we have to build and we have to build in a manner which is not for tomorrow, we have to build with the future in mind.

He said that the manifesto of the main opposition New Democratic Party (NDP), which was also released over the weekend, was ‘clearly” written by foreigners because after he had read it, there were places and situations that certainly were not akin to St. Vincent and the Grenadines.

Gonsalves told supporters as a result, the two manifestoes provide the opportunity for voters to choose the path forward.

“The first option, the option of the Unity Labour Party is to lift SVG higher …and sustainably, to lift the metaphoric soul of our nation in every material particular. Our manifesto touches matters of your life, your living and production, touches the essence of us, our spirit, our soul and our wellbeing.

The 74-year-old Gonsalves said that while his party’s manifesto “centers on this metaphoric soul, the alternative option that of the NDP is to advertise for the sale of the nation…and to sell also the sacrament of nationhood, our passports and our citizenship”.

Gonsalves has long held the view that his administration would not support, as other countries in the Organisation of Eastern Caribbean States (OECS) have been doing in providing citizenship to foreign investors, who in return would make a substantial financial contribution to the socio-economic development of the islands.

He said the opposition party was supportive of that policy and was prepared to sell citizenship and passports to “shady foreigners, vagabonds….

“I am speaking to you from the vantage point of someone who has laboured in this political vineyard, longer and more productively than anybody else,” Gonsales said, reminding supporters that the future of the country will depend on which of the options they intend to support.

“What they have done is to out a for sale sign in the window of our nation and say to the foreigners come and buy,” Gonsalves said, telling supporters ‘this election is no joke business.

Gonsalves told supporters that his administration already has “lined up” more nearly a billion dollars (One EC dollar=US$0.37 cents) in relation to projects in the public sector over the next five years with ‘almost half of that being the port and the development of aspects of Rose Place.

‘Construction boom ahead, jobs, making Argyle International Airport (AIA) work, jobs,…the modern port project which is US$200 million for which we have the funding for,” he said, as he outlined the 10 major components of the governments’ future development plans.

“Without that, you can’t go anywhere,” he said, listing among them also the social democratic philosophy which he said has underpinned the government performance since 2001.

Gonsalves said apart from the billion dollars earmarked for projects in the public sector, his administration has also been able to “line-up” more than a billion dollars in private investment.

He said these include funding for several hotel projects here and that on Monday, officials from the Jamaica-based Sandals Resort will “present to us in the Cabinet their more detailed physical proposal “ for the Buccament Bay Resort.

On July 22, when the government signed a deal with Sandals for the takeover of the resort, it also announced that Sandals had paid down 10 per cent of the US$17.5 million for the resort.

The government has acquired the resort, which has been closed since December 2016 and is selling it to Sandals, which would operate a Beaches Resort there.