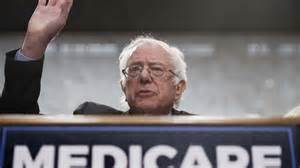 Last week while South Floridians grappled with the upheaval brought about by Hurricane Irma, former Democratic presidential candidate Bernie Saunders stoked the national healthcare debate. Saunders unveiled the single-payer system, a plan he pushed during his candidacy, as the means for improving America’s problematic healthcare system.

Although the argument for a single-payer healthcare system is currently supported by Saunders and others, it’s not new.

Single-payer began with Medicare in the ‘40s

Back in the 1940s President Franklyn Roosevelt master of White House/Congressional negotiations, tried to broker a single-payer system, under which the federal government would be the single, or sole payer of Americans healthcare needs. However, he was only partially successful. Congress did approve a single-payer system, called Medicare but applicable only to Americans over age 65.

After years of trying to amend, and repeal the system, Medicare still exists, providing broad-based healthcare to its beneficiaries. In fact, Medicare is regarded as the best example of the single-payer system. Supporters of the system, like Saunders, want to see a Medicare-For-All system.

Recent polls indicate a slight majority of Americans, 53 percent, favoring a single-payer healthcare system. However, this system is contradictory to the ideology of Republicans, including those currently controlling the nation’s administration.

Not favored by Republicans

Republicans don’t favor government control of healthcare, and that’s what the single-payer system does. But there are positives in the system that requires objective consideration outside of political ideology.

The main argument against the system is that it will cost the government an exorbitant budget, resulting in increases in federal taxes paid by citizens and businesses.

The main argument for the system is that it’s the closest to universal healthcare. It would afford almost every American comprehensive healthcare coverage. This includes the ability to choose one’s doctors, receive hospital, ambulatory, mental health and substance abuse treatment, reproductive, maternity and family planning services, and subsidized cost of prescription drugs. These are services the public are seeking.

Generally, the beneficiaries of the current Medicare system hail it for meeting their healthcare needs. Many seniors with serious health issues have been able to receive first-class primary, specialist, and hospital care through the system.

Medicare is not a free service. Currently it cost beneficiaries an average fee of $106 monthly, which in most cases is deducted from their Social Security benefits. This fee is not related to one’s income or financial strength.

Partnership in the Medicare system is also one that’s aggressively sought after by private health insurers. Most of these insurers offer what is called Medicare Advantage which that its beneficiaries advanced healthcare benefits for the same monthly fee.

However, because beneficiaries are senior citizens who demand more regular, and more expensive healthcare, the government, the single-payer, incurs a huge bill subsidizing the enhanced medical expenses.

Supporters of the Medicare-For-All single-payer system argue if the system is expanded nationally more people would be paying into the system, thus alleviating the need to pay higher taxes.

There is some validity to this argument. Younger people say under age 40, included in the system would pay the monthly premium, but not place a heavy financial burden on the system since they are normally healthier.

Another argument supports the introduction of fees based tied to income scales. Citizens earning higher incomes would pay higher fees, and lower income earners lower fees. However, fees would not dip below a set national monthly rate.

Apart from the Republican administration, other strong opponents to the Medicare-For-All system are private health-insurance companies. Although they jump on the current Medicare band-wagon, they continue to charge high premiums to non-Medicare customers. Under a Medicare-For-All program, their premiums would be fixed by the government.

Plan has advantages and disadvantages

The single-payer system has its advantages and disadvantages. But, for average Americans badly in need of affordable comprehensive healthcare, the advantages are paramount.

Instead of the incumbent Republican administration rubbishing Saunders plan as they are inclined to do, it would be responsible if they at least establish a formidable bi-partisan committee to study the plan, and report accordingly.

Affordable comprehensive healthcare is definitely a right due to every American. The single-payer system could potentially provide this right. Americans should, therefore, expect the proposed plan to be copiously analyzed. It just may be the practical solution.