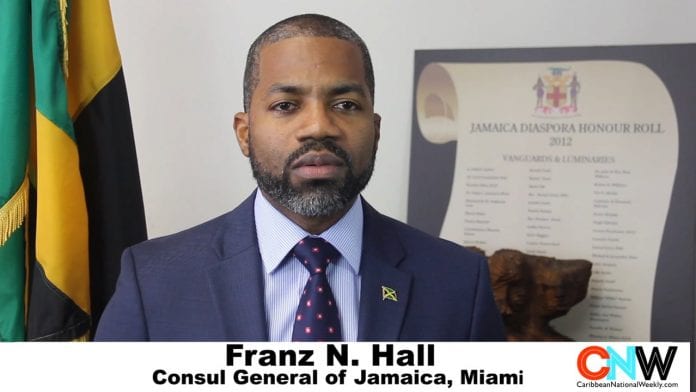 Franz N. Hall, who has been the Jamaican Consular general to the South-East US, is scheduled to end his diplomatic assignment. His tenure, which began his tenure in October 2013, end on February 28.

As he prepares to return to an assignment at the Ministry of Foreign Affairs and Foreign Trade, the outgoing issued the following letter to the community.

I am using this opportunity to advise that my appointment as Consul General of Jamaica will come to an end on 28th February 2018. It was an honor and a privilege to have served the Government of Jamaica in this capacity.

It is hard to believe that four years have gone by so quickly. However, during that time, I have come to appreciate the dynamism and the generosity of spirit that exists within the Jamaican community in the South East USA.   As I transition to a new role in the Ministry of Foreign Affairs and Foreign Trade in Kingston, I do so with the knowledge that the Jamaican community is not only alive and well, but flourishing, as it continues to make its undeniable mark on the communities in the United States of America.

Any positive impact that I may have had during my assignment is a reflection of the efforts of the team at the Consulate General, who continue to serve Jamaica and the Jamaican community, often under challenging circumstances.  It is their commitment and dedication that sustain the work of the Consulate through changes at the diplomatic level.

Sincerest thanks for your engagement, friendship and partnership during my time at the Consulate General and I know that you will offer to my successor the same level of support that was so graciously extended to me during my tenure.