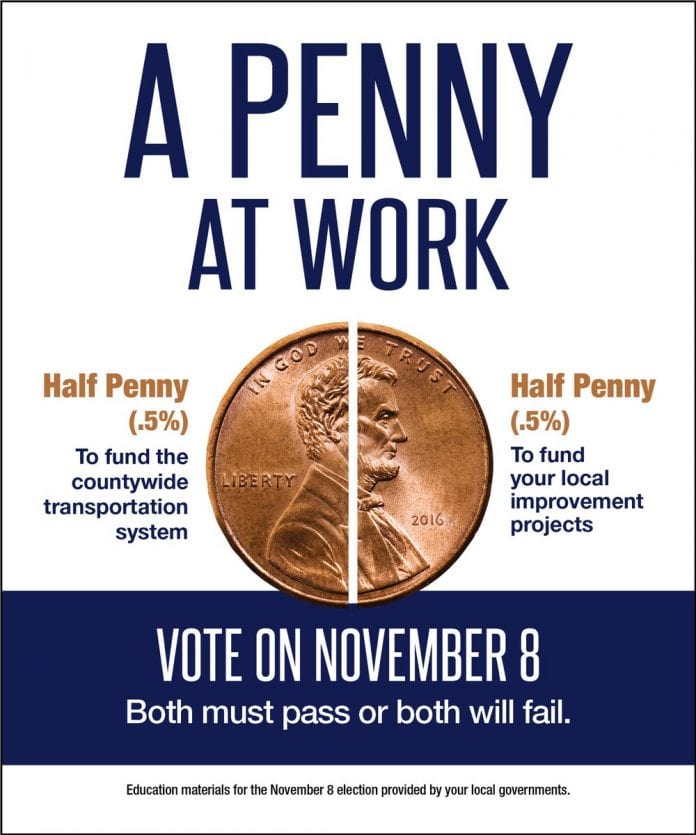 Two initiatives appeared on Broward County’s general elections ballot last week which if approved would provide funding from a penny increase in the county sales tax to improve the county’s transportation system, and repair some of the county’s crumpling infrastructure.

The two ballot initiatives each asked voters to approve a half-cent increase in sales tax. Voters narrowly approved the increase to support improvement of the county’s transportation (bus, rail system, etc.) to reduce traffic congestion. However, by a large margin they voted against the increase to fund improvement of the county’s local government infrastructure, including public buildings, roads, recreation facilities, purchase public, safety vehicles, etc.

Prior to last Tuesday’s election voters questioned why there was not just one initiative asking voters to approve a penny increase in the sales tax, as was done in the case of Palm Beach County. If this was the case, and was  approved, the increase would facilitate both transportation and infrastructure development, but since one of the initiative failed, the transportation initiative has also failed.

Prior to approving the twin-tax increase initiatives on the county ballot Broward Commissioners and mayors of the county cities, focused on a one-penny sales tax to fund transportation a matter of critical important to county residents. A local poll conducted earlier this year indicated some the majority of residents were anxious for the county’s transportation system to be improved. In this poll 73 percent said they were “frustrated by the long, tiring commute problems within Broward.”

However, before the initiative was approved for the ballot some city leaders balked at receiving a proposed 30 percent of the proceeds from the penny tax, demanding a 50 percent share for infrastructural development in their cities.

The resulting compromise was two different initiative, one for transportation, another for transportation. “But this was risky, if not nonsensical,” said Leopold Phillips, a Fort Lauderdale public administration consultant, “because both initiatives had to be approved by voters before either could be implemented. Moreover, a half-cent tax increase would be impractical anyway.”

Several voters contacted by National Weekly said they were not aware both ballot initiatives had to pass for either to be implemented. “To me improving county transportation was more crucial than repairing buildings, so I voted for the transportation initiative,” said Mondie Sinclair.

Broward Commissioner Dale Holness said vote on the tax increases indicated where “the priorities of voters lie. The people, like the county commission, are concerned about easing traffic congestion, better synchronization of stop lights, and a more efficient bus and rail system.  County and city leaders must now revisit the tax increase issue and find a compromise that satisfies voter’s demands while meeting county and the cities objectives.”