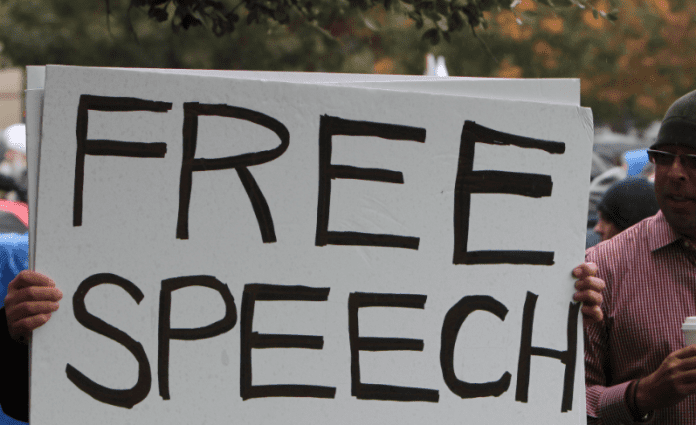 Emotions have been running high along the Donald Trump campaign trail these past few weeks. Just last week saw violent clashes between Trump supporters and Trump protestors in Chicago, eventually leading the campaign to cancel a planned rally. Fistfights broke out between demonstrators and followers, requiring police intervention.

Both sides, regardless of political convictions, may have believed they were enacting their constitutionally protected right to freedom of speech – to bodily and aggressively express their political ideals. It does not help that the presidential candidate himself has seemingly advocated for freedom of speech through violence, often in the heat of the moment egging supporters on to seek out protestors. He himself expressed his own desire to “punch a protester in the face.”

The First Amendment of the U.S. Constitution does give Americans the right to assemble and protest peacefully. Word for Word, the first amendment promises that “Congress shall make no law respecting an establishment of religion, or prohibiting the free exercise thereof; or abridging the freedom of speech.” But the amendment was never meant to allow violent protest, nor allow free speech used to incite violence against others. There are those who firmly believe that the political tension of today’s presidential campaign stems from individuals and groups misusing the First Amendment as a methodology to incite lingering public discontent – a situation that could have to very dangerous consequences.

Social media, in many ways, has heighten this aggressive branch of free speech with such trigger-happy platforms as Twitter, Instagram, and Snapchat. We also arguably see this same aggressive speech culture in mainstream media, through their use of “sound-bites” that document and highlight every irresponsible and inciting word uttered by candidates, members of their campaign team, and celebrity supporters. Portraying complex political situations through sound bites focuses on sensation rather than substance. These sound bites also perpetuate the cycle; the more controversial these words are the more, the more frequent they are re-broadcasted and the faster and wider they are copied and spread by social media.

It’s apparent that some television media companies salivate at outrageous, inflammatory speech in the political arena. Too often, these irresponsible statements of politicians, their supporters and the growing cadre of political analysts and commentators are fodder for “breaking news” to stimulate ratings.

A growing number of Americans are increasingly concerned about this irresponsible free speech repeated again and again throughout the repetitive 24-hours news cycle. They are concerned about how quickly these words spread on social media. One cannot help watch this growth of aggression and fear that the US could be approaching a major national crisis.

When the founding fathers of the American Constitution drafted this document, they probably would have reconsidered the right for every citizen to speak freely and to protest if they could have foreseen the powerful influence of 24-hour television news and social media.

The right of freedom of speech, and the right to protest, are powerful rights in the American Constitution, and rights passionately craved for by people living under totalitarian regimes. However, these are rights that should be used responsibly. The line between responsible and irresponsible freedom of speech is rapidly becoming blurred. This is very dangerous for the nation, especially in an environment fraught with tension.