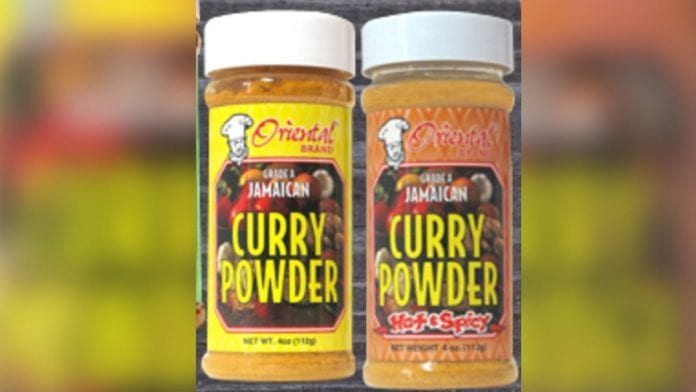 Oriental Packing , the company at the center the recent recall of certain brands of curry powder is facing losses of over $4-million.

According to the FDA, the product was recalled due to lead contamination. However, Derrick Lue, the Jamaican owner of Oriental Packing, said a recall was first issued last August and despite weekly tests, there were no traces of lead. He added that the recall was reissued in December as the FDA still had suspensions about the presence of lead.

Lue said his company also does weekly testing and to date there has been no evidence of lead, based on this, he believes the latest recall is unwarranted.

He also voiced concern about the origination of the recall letter. The letter of recall that was issued to Oriental and its main distributor –  Ocho Rios Miami Trading, came from the Connecticut Department of Public Health. He said while his 35-year old company distributes products including curry powder, jerk, oxtail and chicken seasonings in the Florida, New York, California and Canada, it has no business in Connecticut.

Lue is quoted as saying the damage has already been done to his small company, and he is uncertain about the recovery process.

Meanwhile, the general manager of Ocho Rios Miami Trading, Leroy Tenn has also expressed concern about the FDA’s recall. In an interview with the National Weekly, Tenn said he was in receipt of a letter from the FDA indicating the recall was initiated because of uncertainty of the lead content in the specific batch of curry powder imported from India.

He however stated that there is no confirmation of lead in the affected batch, and he expects the recall to be lifted soon.

He also note that contrary to consumer assumptions, the recalled brands of curry powder are not imported directly from Jamaica, but  packaged in the region by Oriental Packing Company in Miami for Ocho Rios Trading, Blue Mountain, Grace and other curry wholesalers.

According to a large Miami food distributer – who asked to remain anonymous, the marketing of curry power is very competitive in the US. Curry powder is widely used by Caribbean migrants, especially Jamaicans and Trinidadians as well as Asians – especially Indians.