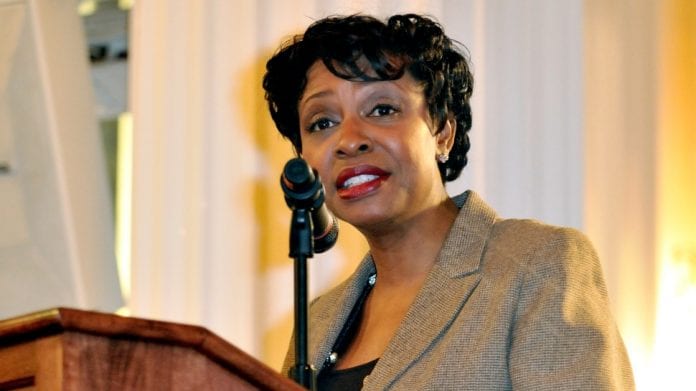 On Sunday evening, she convened an emergency meeting with the Muslim community in Brooklyn, within her US District. The meeting was entitled “”Protect Yourself and Your Family from Donald Trump’s Anti-Muslim Executive Orders” in response to Trumps executive order which in turn was titled, “Protecting the Nation From Foreign Terrorist Entry Into the United States.”

The meeting attracted a large “standing room” only crowd. At the meeting Clarke gave assurances that Democrats in the US Congress will be working diligently to revoke the ban.

Addressing the executive order. Congresswoman Clarke stated, “In the best of our traditions, the United States has welcomed people from around the world who wanted to come here to pursue the American Dream.

Such people, include many of the families I am honored to represent in Brooklyn, where my parents settled in 1955 from the Nation of Jamaica.

There are, unfortunately, periods in our history when the United States has departed from that proud tradition, as when Japanese Americans were forced into internment camps during the Second World War and when strict limits were placed on immigration from Eastern and Southern Europe in 1924 based on irrational fears about Catholic and Jewish influence on American culture.

We cannot as a nation allow xenophobia to undermine our principles or racism to determine our policies.

There are more than three million Muslim Americans living here today. These are the same individuals who volunteered for service in the Armed Forces, and who are our neighbors and friends.

I will never accept this attack on Muslim families as the policy of the United States. I will resist, and I call on my colleagues in Congress and people of good faith across the United States to join me in resistance to this act of hate.”

The Congresswoman was also at JFK Airport on Saturday evening with other New York lawmakers meeting with families of many of the immigrants affected by the Trump order being executed by U.S. Customs and Border agents. In a tweet during the confusion at JFK and other airports as some immigrants originating from the seven countries were denied entry Clarke tweeted, “We will not let him (Trump) destroy America.”

A few hours on Saturday evening, the American Civil Liberties Union (ACLU) succeeded in getting federal courts to lift detention orders on green card holders originating from the seven counties entering the US subsequent to the executive order.

In an interview on MSNBC on Monday, Congresswoman Clarke told Tamron Hall she rebukes Trump’s argument that the executive order was not a ban on Muslims. “Of course it’s a ban on Muslims,” she responded.

In Washington DC, Caribbean-American US Senator Kamala Harris from California attended a protest rally related to the executive order, and also insisted it is “a Muslim ban, no matter how Trump tries to spin his way out of the mess he has created.”