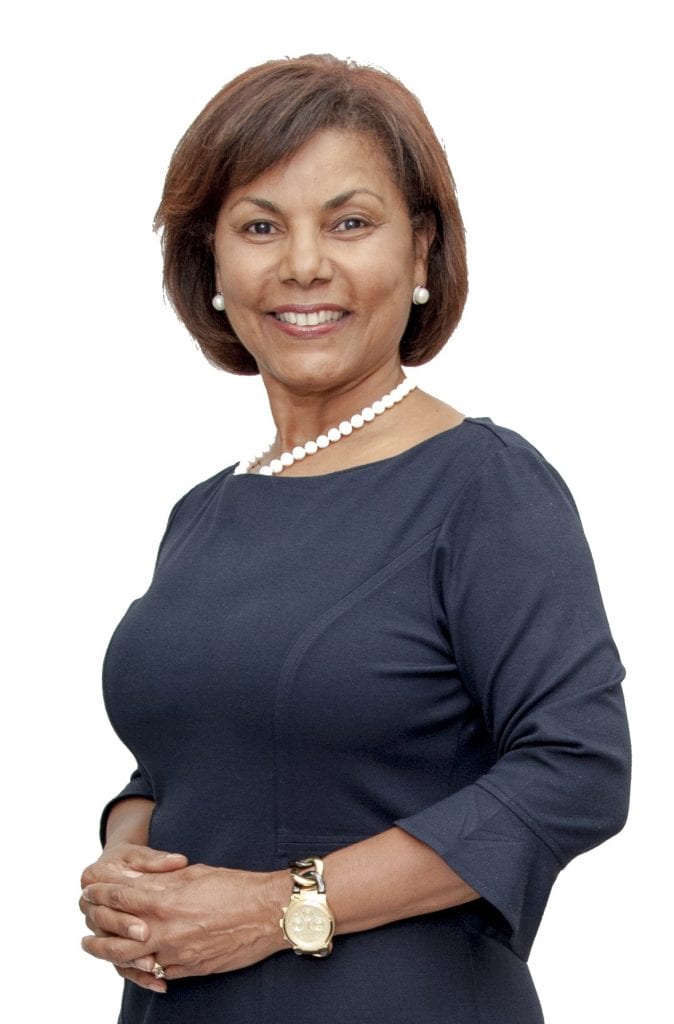 Forty-five years ago, Carmen Bartlett joined the staff of the Jamaica National Group. And, after spending the last 21 years of that tenure as Regional Manager of JN Money Services (JNMS) USA Southeast Region, retired her post effective March 31. Last Saturday evening she was honored for her services by the management and staff of Jamaica National, and guests from the South Florida’s Jamaican community at a reception at the Ritz Carlton hotel in Fort Lauderdale.

Last year, when JN Money Services (JNMS) USA Southeast Region celebrated its 20th anniversary of operating in Florida,  Mrs. Carmen Bartlett, wife of Jamaican Minister of Tourism, Ed Bartlett, was happy to share one of the pivotal moments of her career.

At that time she recalled that shortly after the opening of a new office in Florida, in the United States of America (USA), she was transferred to the new location in Lauderdale Lakes.  She thought it was an office which would not require her to handle customers’ queries or complaints.

However, rather than call her new office home, the native of Ketto, Westmoreland, in Jamaica, hankered for the daily interaction with JN Money’s customers, many of whom related to members of her staff on a first name basis. Therefore, it was not surprising that she made the decision to return to her previous location where she could enjoy daily interactions with the company’s clients.

“I was at 24th Street where we started and then I moved to an office,” Mrs. Bartlett related. “Although I liked the new environment, I preferred interacting with our customers and therefore returned to the original location on 24th Street because I did not need an enclosed office to be a part of the community.”

When she joined the JNMS team in 1997, Mrs. Bartlett, a mother of two, thought the task was insurmountable given her unfamiliarity with Lauderdale Lakes and its environs. Undaunted, she immediately began promoting the JN Money Transfer brand, now rebranded JN Money, by going ‘door-to-door’ to businesses along the “441” corridor.

“There were two of us in that office, and we strategically attended church services, participated in civic organizations, and buitd our relationship with residents in the South Florida Region,” she stated.

“We also sponsored community events, had Christmas treats for the children; and carried out other corporate social responsibility initiatives,” she explained.

“We spent many hours responding to queries, providing investment advice and listening to members’ stories about growing up in Jamaica,” she recalled. “These interactions helped us, because to this day, we maintain good relationships with our customers and the community.”

Based on those contacts, Mrs. Bartlett was also instrumental in establishing three additional JN-owned JN Money locations; and a network of some 30 agents, a feat which made JN Money Transfer an influential operator from the South Florida to Jamaican remittance corridor.

As she reflected about the good times she had with the only Jamaican-owned remittance company, Mrs. Bartlett recalled that it was quite sad when the company made some harsh decisions in 2013.

“I believe that was one of the most painful and stressful eras, as we downsized and subsequently closed our Plantation Office.,” she related.

However, the grandmother of two did not allow that one retrenching period to negatively affect her desire to serve JNMS and Jamaicans. As, prior to that event, Mrs. Bartlett played an important role in the establishment of the JN Overseas Representative Office in Florida.

“The relationships which we built through JN Money Services made the establishment of the JN Florida Rep Office possible, as our research revealed that many Jamaicans in South Florida wanted to maintain their contact with home; and through the Rep Office, that became possible,” she explained.

Speaking at the JNMS 20th Anniversary Dinner in South Florida, last year, Leon Mitchell, chief marketing sales officer, JN Group, commended Mrs. Bartlett and her team for, “Capturing a share of the remittance market from the ‘Goliaths‘ of the remittance industry.”

And, he also quoted JN Group Chief Executive Officer, Earl Jarrett, who once told the JNMS team members, “You can do well in any market, if you approach it with pride.”

Prior to joining JNMS, Mrs. Bartlett was employed to the then Jamaica National Building Society (JNBS) as an assistant manager. However, her initial engagement with JNBS started some 25 years earlier, when she was employed as a teller in the Society’s branch office in Westmoreland. There, her passion for customer service led to her appointment as assistant manager.

“I am a firm believer in the mantra, “helping members find a way.” In fact, I was instrumental in establishing several customer service initiatives while with the building society, and those later benefitted our promotions in Florida,” she explained.

Horace Hines, general manager of JNMS, owners of the JN Money brand, has known Mrs. Bartlett for many years and praised her commitment as a team player.

“Mrs. Bartlett’s has been instrumental in helping us establish a foothold with JN Money USA South East Region. Her dedication and commitment underlies the Jamaica National Group’s mantra of helping Jamaicans to find their way. We salute her for her passion to Jamaicans over the years and wish her all the best.”

As she calls time on a glittering career, Mrs. Bartlett has formulated plans as to how she spend her retirement.

“My plan is to spend more time with my family; travel a little; and concentrate on serving favorite charities, such as The Cystic Fibrosis Foundation and the Medical Mission to Jamaica, back to Ketto in Westmoreland,” she related.

“I am also looking forward to spending more time with my grandchildren, as they are the world to me; and will do more Zumba dancing, which is one of my hobbies,” she revealed. She also indicated she will still be contracted to The Jamaica National Group.

Mrs. Bartlett will be succeeded by Maxine Hines, a senior staff member of JN Money Transfer as Regional Member.