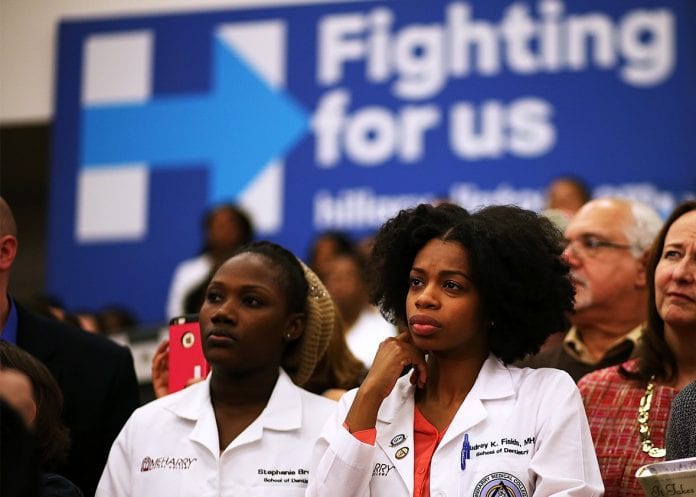 Black female voters must “do the right thing”

In the waning days of her campaign to be elected US president, Hillary Clinton is trying to up her appeal to one of her strongest core supporters – women. Over the course of her campaign since she was formerly nominated in August women have shown by some 60 percent to overwhelmingly support Clinton.

However, there is concern in South Florida’s Caribbean American and African American communities that women aren’t as enthusiastic about Clinton as the polls indicate.

FIU Statistics and Scientific Research graduate Johnathon Meyers, currently president of a demographic and market research company in Miami, has been conducting daily polls at polling places since early voting commenced on October 26. As a Caribbean-American, he is concerned by two factors.

“I assume with all the negative rhetoric by Donald Trump and evidence of his utter disrespect for the integrity of women, more Caribbean-American women would respond by voting. But, we’re not seeing this at the early voting sites in either Miami-Dade or Broward County.”

Following Meyers observation, on Wednesday National Weekly checked with several Caribbean-American women and found only 40 percent had voted. Of the 60 percent that had not voted 64 percent said they planned to vote either during early voting or on Election Day, November 8.

Of the other 36 percent, 50 percent said they “were not sure” if they will be voting and 50 percent they “definitely” wouldn’t be voting.

Among reasons given for not voting were: “both candidates are dishonest and evil”; “neither Trump or Hillary prove to me they can run the country”; and “it makes no sense to vote since the situation never changes.”

Fort Lauderdale gender specialist, Nadine Blisset, said she has also received feedback from early voting assessments that the turnout has “been less than enthusiastic” from black women which would include Caribbean-American women.

Blisset is hoping this will change in the days remaining for early voting and on Election Day. “I would be surprised if a high percentage of Caribbean-American women don’t turn out in these elections as the prevailing issue is one which concerns Caribbean women. That issue is being respected by their men.”

The gender specialist said in the execution of her profession she frequently encounters Caribbean-American women who complain about domestic abuse, unfair workplace practices favoring men over women, and sexual harassment. “So, how can women who are seeking more respect by the men in their personal lives, not turn out to vote against a male presidential candidate shown on a video demeaning women and having no reservation to sexually harass women if and when it pleases him?”  She  said she believes when black women really realize that there is a real chance that this candidate could be elected president they will turn out and vote, and vote for Hillary Clinton. “I think black women, and women generally, will do the right thing in this election.”