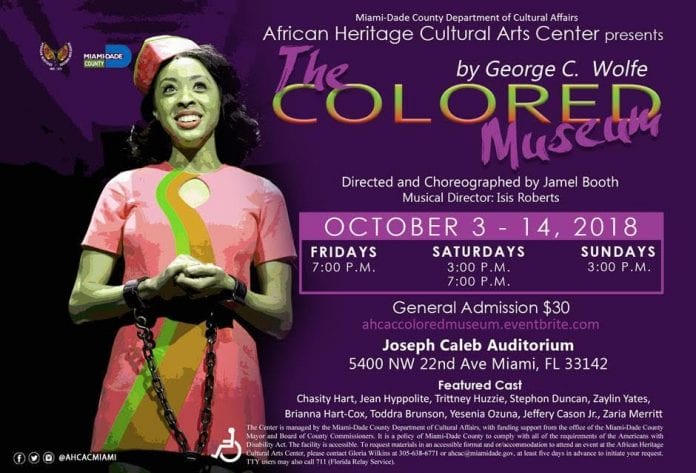 Directed by Miami native and FAMU alumni Jamel Booth, this play expounds on prominent themes and identities in the African American culture. Displayed in a fictional museum, 11 exhibits are performed as one-person plays or monologues to discuss themes such as, racism, stereotypes, segregation, slavery, and intra-community conflicts in black culture.

The Colored Museum received overwhelming critical praise for its provocative subject matter and in-depth exploration of the African-American theatrical and cultural past. It has been performed in New Jersey, New York, and London, most famously at the Royal Court Theater.

George Costello Wolfe is an African-American playwright and stage/film director best known for directing Angels in America: Millennium Approaches, as well as the musical, Bring in ‘da Noise/Bring in ‘da Funk. He won Tony awards for his direction of each and served as Artistic Director of The Public Theater in New York from 1993 to 2004.

–         The opening night reception will be on October 5, 2018 and will feature light hors d’oeuvre, beverages and a Meet and Greet with the cast.

To have questions answered or need special consideration, please contact the Theater Director, Jazmin Jones-Oliver at 305-638-6771 or email: [email protected].